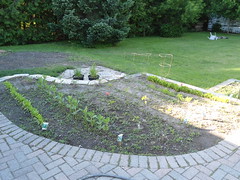 I also wanted to plant some fruit. We have wild raspberries in the back, and i was thinking of doing a “domestic” blueberry and raspberry patch. But I was also thinking of trying cherry trees, or apple trees, or maybe even orange trees (you need at least two for them to grow fruit, I’m told). If you’ve got any advise on growing fruit in the northern part of the world, let me know.

I know, I need to weed the garden.

Matt is the owner of this site and primary author. He also tweets, posts photos, stars in videos, listens to music, makes software, develops Habari, and creates websites.